Showing posts from February, 2012
Show All

From Digital Spy:PlayStation Network to be renamed Sony Entertainment Network

PlayStation Network is to be renamed Sony Entertainment Network, it has been revealed.

Sony has confirmed that the change will take place on PlayStation 3 and PlayStation Vita consoles from tomorrow, February 7 2012.

The move will make it "clearer and easier" so that users can access "all Sony products" with a single log-in, a spokesperson told Eurogamer.


© Sony
Over the weekend, it was thought that only PSN accounts would be rebranded, and not the service itself.

Besides minor terms of service alterations, the change is in name only. Subscribers' username and password details will not change.

"This transition is based on Sony's goal to enhance its unique digital entertainment offering. As a series of these activities Sony started last September, PlayStation Network will be aligned with Sony Entertainment Network," read an email from Sony to its subscribers. 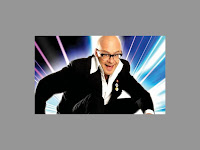 From Broadcast:Harry Hill in talks with C4

ITV comedian Harry Hill is understood to be in talks to move to Channel 4 that could see him making a film with the broadcaster.

C4 is understood to be offering a golden handcuffs deal worth £2m, with a film and sketch series currently in discussion, according to reports.

Harry Hill’s TV Burp, an award-winning staple in ITV1's schedule, is expected to finish at the end of March. The comedian is understood to have turned down a £1m pay rise to stay at ITV, which would have taken his salary to £4m.

The comedian is thought to have become tired of TV Burp, produced by Avalon Television, because of the long hours of research and the amount of TV he needed to watch to make the programme.

C4 is thought to be offering him more creative freedom.

“Quite a lot of them are engaged by that, they get to a point in their career…
Post a Comment
Read more

By SWCJ - February 05, 2012
Comedian Nathan A Thomas and television presenter Olly Murray, who used to present Nickelodeon UK and Ireland's TEENick/TeenNick teenage programming block between 2009 and 2010, have launched their own audio comedy podcast called "The Olly and Nathan Podcast", which you can listen to and/or download here on Apple's iTunes web store or through the iTunes app on a Apple iPhone/iPod/iPad. Please note that some of the episodes of "The Olly and Nathan Podcast" are intended for a mature audience, and parental guidance is advised.