Showing posts from October, 2011
Show All

Your favourite adult puppet show is back on BBC Three with a brand new double bill at 22:30 on Monday 7th November. DON'T MISS IT *****. Here's a taste of what's to come...
Post a Comment
Read more

PlayStation Vita games to save either internally or to memory card

From Digital Spy:Vita games to save either internally or to memory card

PlayStation Vita games will be capable of saving data to either a memory card or the game cartridge, but not both.

A representative of Sony Computer Entertainment confirmed to Kotaku Japan that games which feature internal memory will not provide an option to save using a memory card.

Games which require a memory card may do so for a number of reasons, such as installing Live Arena data or for future downloadable content. The decision will be left up to game developers as to whether to use internal memory or a memory card for saving data.

Of the 26 launch titles in Japan only seven are confirmed to require a memory card, including Uncharted: Golden Abyss, Disgaea 3 Return, Hot Shots Golf 6 and Ridge Racer.

Titles such as Ultimate Marvel vs Capcom 3, Army Corps of Hell, Shinobido 2, Blazblue Continuum Shift Extend and Michael Jackson will save internally on the game cartridge.

Grand Theft Auto V will be set in Los Angeles, according to a report.

A source close to the project told Kotaku that the open-world game will be set in the West Coast city.

It was suggested that a change to the series formula could be underway, while several sources have added that multiple characters will also be playable throughout the course of the game.

The fresh report backs up previous speculation that the fifth Grand Theft Auto will be set in modern-day Los Angeles, and feature returning characters from GTA: San Andreas and GTA IV.

Grand Theft Auto III was about freedom rather than violence, according to Rockstar Games co-founder Dan Houser.

The studio president told Gamespot that he prefers the term 'open-world' instead of 'sandbox' to describe the game, which celebrates its tenth anniversary this month.

"To us, sandbox has this idea of throwing things in without any sense of choice over what's going in there, while we were carefully picking features and controlling the experience in a particular way," he said.

"It wasn't this total freeform experience. We gave the player more freedom, but it was just controlled in another way. That's why we prefer 'open-world'. It's just more descriptive of what we felt we were doing."

Rockstar is re-releasing GTA III for mobile devices to mark its tenth year. It will be available this month for iPad 2 and iPhone 4S, as well as Android pho…
Post a Comment
Read more

Toy giant Mattel has confirmed that it will acquire Thomas the Tank Engine parent Hit Entertainment for US$680m.

The deal brings to an end Hit's search for a new owner after current parent Apax Partners put it on the block last year.

The auction process had included Saban Brands, Disney and Mattel rival Tomy, with the Thomas brand (aka Thomas & Friends) the key driver for potential owners, but Mattel has won out.

Mattel's chairman and CEO Robert Eckert paid tribute to Thomas & Friends and said his company was "the right place for it."

Graham Linehan Turns Off The British Sitcom "The IT Crowd" 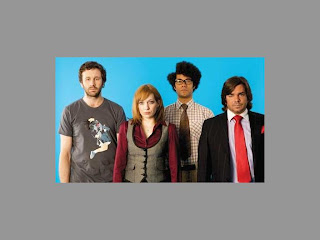 From Broadcast:
Linehan turns off The IT Crowd


Channel 4 sitcom The IT Crowd will not be returning for a fifth series but will wrap up with an extended special, creator Graham Linehan has confirmed.

Opening a web chat on reddit.com, Linehan said that the fourth series had ended on a high, creating “a natural time to wind things down”. Series four, he said, contained two of his favourite episodes, Final Countdown and Jen the Frodo, and he hadn’t found a way to top those.

The Talkback Thames show has been a banker for Channel 4 and the channel’s longest-running sitcom after Peep Show. It has delivered some of C4’s biggest comedy audiences. An episode from the first series delivered the channel’s biggest audience for a sitcom in the past five yea…
Post a Comment
Read more

A new Professor Layton title is in development for iOS devices.

Level-5 is working on the exclusive project under the working title of Layton Brothers Mystery Room, reports Andriasang.

Full details of the game have yet to be announced, though the developers have confirmed that the title character will be absent from the story. The professor's son Alphendi and partner Lucy will take centre stage, investigating crimes for Scotland Yard.

Mystery Room is said to have begun life as an entry in Level-5's Atamania series for DS before being rebranded as a Professor Layton iOS title.

Nintendo announced last month that Professor Layton & The Spectre's Call will be released for the DS on November 25, kicking off a new trilogy that will carry over to the 3DS.

A release date for Layton Brothers Mystery Room is yet to be confirmed.
Post a Comment
Read more

Professor Layton & The Spectre's Call will be released in Europe on November 25, Nintendo has announced.

The fourth instalment of the popular handheld puzzle series takes place three years before the events of the original Nintendo DS game.

It will serve as the starting point for a new trilogy of games which will carry over to Nintendo's latest handheld the 3DS.

However, PAL users will not have access to the bonus RPG found in US and Japanese versions, reports Eurogamer.

The 100-hour RPG titled Professor Layton's London Life is developed by Mother/Earthbound developer Brownie Brown, and was originally due to appear as unlockable content in the PAL release.

It will be available for North American users when the game is released (as Professor Layton and the Last Specter) on October 17.
Post a Comment
Read more

Grand Theft Auto III: 10th Anniversary Edition has been given an official trailer by Rockstar Games.

Announced last week and shown running on an iPad earlier today, the trailer looks at the many sights and sounds of the PlayStation 2 classic.

After a montage of the game's missions and locations of Liberty City, the trailer concludes by thanking fans for all their support.

Originally released in 2001, Grand Theft Auto III was the first 3D entry in the series, offering a vast and unprecedented open-world to explore.

Grand Theft Auto III: 10th Anniversary Edition is expected to be released in the next few weeks.

With so many massive titles due out between now and Christmas, publishers will be calling out to gamers and gifters through some equally gargantuan campaigns. MCV provides a complete rundown of every major moment...

Six titles will benefit from the bulk of Ubisoft’s marketing investment this quarter – but those are only the tip of the publisher’s new release iceberg.

Just Dance 3, Assassin’s Creed: Revelations, Tintin, Rayman Origins, ABBA: You Can Dance and The Black Eyed Peas Experience will each receive a dedicated six-figure multimedia campaign. These games will be promoted via heavyweight TV and retail activity around their respective launch dates. Ubi has also invested in series of unusual ventures for its biggest titles.

Just Dance 3, for example, is the official sponsor of Katy Perry’s UK and Ireland concert tour this autumn. The game will be playable at every venue and a competition will give fans the chance to meet the singer herse…
Post a Comment
Read more

But the Canadian movie star says he's still waiting to hear whether his co-star Bill Murray will be involved.

"The script is in my truck, so that'll tell you how close we are," Aykroyd said Thursday during an appearance at…
Post a Comment
Read more

The open-world title will see a re-release on phones and tablets as part of its tenth anniversary this month.

It will be playable on iOS devices iPad 2 and iPhone 4S, as well as Android phones and tablets including HTC Evo 2, Samsung Galaxy S2 and the Samsung Galaxy Tab 10.1.

Also announced was a special edition figurine of main character Claude, which will be available to Rockstar Social Club members as part of a giveaway.

© Rockstar Games
Originally released on PlayStation 2 in 2001, Grand Theft Auto III was the first 3D entry in the series, offering a vast and unprecedented open-world to explore.

It went on to become the year's best-selling release and propelled the Grand Theft Auto franchise into blockbuster status.

Men in Black will be available as a video game early next year.

The stand-alone title will feature its own original story based on the film series's combination of action, humour and special effects, and will feature familiar faces and new characters.

"The Men In Black franchise is an unbeatable starting point to deliver a genre-bending gaming experience with a level of production value on par with Hollywood," said Activision's executive vice president David Oxford.

Sony Pictures vice president of licencing Mark Caplan added: "With Activision bringing the Men In Black universe to life on next gen consoles for the first time, the Men In Black video game will be both familiar to fans, an exciting beginning for the uninitiated, and revolutionary for the franchise."

A Men in Black game was previously released on PC and PlayStation in 1997, with players controlling Will Smith's character James Edwards w…
Post a Comment
Read more

Uncharted's Nathan Drake, Kratos from God of War, Solid Snake from Metal Gear Solid 4 and more are brought to life in the advert.

The advert concludes with one of the soldiers praising Michael, one of the many PS3 players who has helped the heroes in their adventures.

Watch the 'Michael - Live Long Play' advert for PlayStation below:

Sky 1 HD is proud to announce the return of the star-studded comedy miniseries, ‘Little Crackers'. This is an exclusive for Sky1 and will be aired from December 2011.

Sky recently announced a launch of new British comedies and Little Crackers is returning for another highly anticipated series this December. Little Crackers is a season of autobiographical comic shorts from Britain's best-loved stars - all in line for this Christmas' schedule. The all-star line-up includes performances by Sanjeev Bhaskar (Notting Hill), Harry Hill (Harry Hill's TV Burp), Johnny Vegas (Ideal & Benidorm), John Bishop (A League Of Their Own) and Catherine Tate (The Catherine Tate Show), all directing their own tales. Each narrated film will dramatise …
Post a Comment
Read more 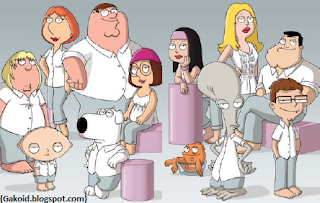 According to Sky Media, FX UK and FX HD UK will be premiering season 9 of "Family Guy" from Thursday 3rd November 2011 comprising of 21 new episodes, and season 7 American Dad in January 2012 comprising of 13 new episodes.

Sigourney Weaver: 'We Won't Do Ghostbusters Without Bill Murray'

By SWCJ - October 03, 2011
From Digital Spy:
Sigourney Weaver: 'We won't do Ghostbusters without Bill Murray'

Sigourney Weaver has insisted that she will not sign up to a Ghostbusters sequel without Bill Murray.

The 61-year-old actress said that she believes none of the original cast will reprise their roles for Ghostbusters 3 if Murray is not involved.

"No, I don't think any of us would do it if Bill said no. Why would we do that? I think the whole point is to get together and have fun," she told Collider.

Fellow Ghostbusters star Dan Aykroyd recently hinted that the film will be resurrected in spring 2012 regardless of Murray's decision.

Director Ivan Reitman told Digital Spy earlier this year that Murray had not read the script.

Ghostbusters, which grossed $290 million on its original theatrical release in 1984 and spawned a sequel in 1989, is returning to cinemas for Halloween next month as an all-new digitally-restored release.
Post a Comment
Read more
More posts